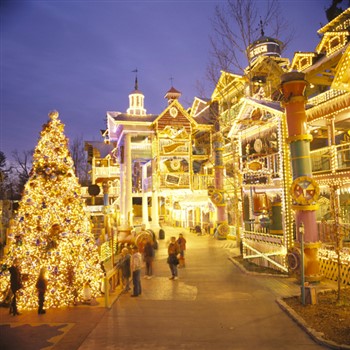 It's been quite a while since Klein Tours ventured to Branson.  There is no better time to make the trek than Christmastime!  Silver Dollar City is packed with countless holiday activities and attractions.  There is so much to see and do, especially with the spectacular display of lights, Broadway-style shows, and comfort foods! This trip has quite a lot planned for passengers but there will still be plenty of time during the afternoons to explore the holiday events and shop!

Depart for Richmond, Indiana where we'll stop for the evening. Dinner will be included this first night.

Enjoy breakfast at the hotel before checking out and departing for Branson. Arrive in Branson and check into the Hotel Grand Victorian. Settle in and freshen up before departing on a dinner cruise aboard the Showboat Branson Belle. See gorgeous views of Tale Rock Lake from one of the most unique vantage points in Branson. Themed after the majestic showboats of the 1800's the Showboat Branson Belle takes guests on a two-hour cruise across the waters of Table Rock Lake. You'll enjoy a delicious three-course meal and an amazing live show.

Awake to a deluxe continental breakfast at the hotel before departing for Dogwood Canyon Nature Park, an outdoor paradise featuring 10,000 acres of natural beauty and rugged scenery across the Ozark Mountain's towering bluffs, waterfalls, creek beds, handcrafted bridges and wildlife. Enjoy a tram tour of the Dogwwod Canyon followed by an included Canyon Deli Buffet lunch. Passengers will have a free afternoon for shopping and sightseeing, including a visit to Branson Craft Mall. Freshen up late afternoon before heading for an included dinner at Paula Deen's Family Kitchen. After dinner, head to see the 2015 Entertainer of the Year by the Terry Awards, Clay Cooper's Country Express. Clay celebrates his 30th season in Branson supported by his cast of 23 veteran performers. This high energy show is filled with singing, dancing, trick-roping, comedy and a variety of music to include country, gospel, patriotic, and rock 'n roll.

Enjoy a deluxe continental breakfast, before departing for the Titanic, the worlds largest museum attraction, providing visitors with the ultimate Titanic experience the moment they step aboard the massive, ship-shaped structure. See more than 400 priceless artifacts and treasures on two decks, walk the Grand Staircase, sit in a full-sized lifeboat and hear actual survior stories, touch an iceburg and more! After visiting the Titanic passengers have the afternoon to tour and grab lunch on their own. The evening's dinner is included at the Golden Corral, followed by the Hughes Brothers 'IT' Show. A complilation of 30 years of show biz excellence, wrapped up into a single incredible experience. 'IT' features over 50 amazing singers, dancers, musicians, and performers who combine their astonishing scope of talents to create Branson's Utlimate Entertainment Experience.

Wake up and enjoy a deluxe continental breakfast at the hotel before enjoying a mid-morning matinee performance of The Doug Gabriel Show, a clean family variety show. The show features a talented cast, rib-tickling comedy and a terrific ensemble of musicians. Plus, Doug plays his World Famous Mufftar, a guitar made out of a 1969 Thunderbird muffler. Enjoy the early afternoon with lunch on own before enjoying an afternoon performance of Six at Dick Clark's American Bandstand Theater. Just six human voices....that's it and you won't believe what comes out of their mouths. Percussion, instruments, harmonies, and that's just in the first 30-seconds of the show. After the show, enjoy an included dinner at Florentia's Ristorante before heading to the Clay Cooper Theatre for the Haygoods show. This talented group of six brotheres and one sister is the REAL DEAL. The Haygoods bring the house down with incredibly tight harmonies, innovative energetic choreogrphy and amzing performances on over 20 different instruments.

Enjoy deluxe continental breakfast at the hotel before checking out to depart for Terre Haute, Indiana. Passengers will check into the Drury Inn and have dinner on own.

Arise to breakfast at the Inn, check out and depart for Columbus, Ohio where guests will check into another Drury Inn. Break up the drive with two stops. The first at the Phoenix Bat Company where they carve baseball bats for the pros and you'll even get your own mini bat custom engraved. Next we'll stop for a guided tour of Anthony-Thomas Candy Company to see how chocolates are made, Induldge in just-made samples while on the tour! Dinner will be on your own this evening.

Rise & shine to continental breakfast, as we check out and make our way back to Pennsylvania.

It is not possible to display the map. This may be due to Google Maps not being supported in your browser.

Search The location was not found

There are currently no departures available on this tour.

The website timed out while searching for the departure dates. Please try again.